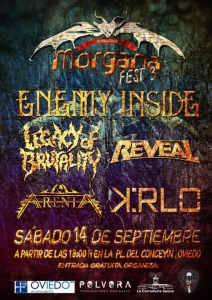 REVEAL will be performing at Morgana Fest 3, to held on September 14, 2019 in Oviedo, Spain. This show will mark the debut live performance of songs from REVEAL’s 2nd album, Overlord, which was released earlier this year. Overlord features some very special guests:

Derek Sherinian from Sons of Apollo (Ex-Dream Theater and many others): Keyboard solo in ‘It’s only a show’.
Chen Balbus (Orphaned Land & The Secret Saints): Guitar solo in ‘The Name of Ra’.
Marcos Rodriguez from Rage: First solo in ‘Path of Sorrows’.
Saeko Kitamae (Metallium, Saeko): Additional lead vocals in ‘It’s only a Show’ (digital bonus track version).

In addition, the cover artwork was created by the famed illustrator and designer Felipe Machado, who has done artwork for Blind Guardian, Iced Earth, Rhapsody Of Fire, and many others.